America’s divisions have gotten deeper and more bitter.   Disagreements on issues like gun control, abortion, gender, immigration, and role of religion in public life are no longer just arguments about public policy.  Instead, Americans view them  as deep and unbridgeable cultural, religious, and philosophical divides.   We are a deeply divided nation — one “Red” and the other “Blue.”

The Rhetoric is Hot and Divisive

of North Korea “Rocket Man,” and his own Attorney General “Mr. Magoo”) and impugns people’s motives.  One of the President’s sons called the head of the Democratic Party a “whack job” and claimed that Democrats are so full of hate that they’re “not even people.”

The President’s critics are no better.  To them, President Trump doesn’t just propose immigration restrictions, he’s a “fascist” whose proposals are similar to forcing Jews to wear yellow stars.  He is, according to Vox Magazine, “unhinged,” “unstable,” “deluded” and suggests he be removed from office under the 25th Amendment as “mentally unfit.”  Even a Republican Senator (Jeff Flake), has compared him to Josef Stalin, the Russian communist leader who murdered millions of people.

A recent CNN town hall on gun control is a stark example of the trend.  The room was filled with people absolutely convinced that gun control is the solution to the mass shooter problem.  When anyone dared question their view, the crowed booed them.  One 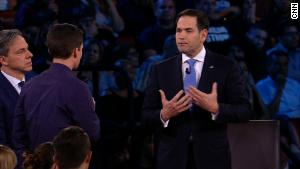 Not the Shooter (CNN photo)

student compared Senator Rubio to the shooter, and the NRA rep. was accused of not supporting her own children.  The NRA was not outdone – it recorded a video soon thereafter stating that the “mainstream media love mass shootings.”

It’s easy to dismiss this angry rhetoric as just talk.  And, maybe it is.  But I’m afraid all this vitriol and division is the beginning of a road that could lead to more serious conflict.  Perhaps even a revolution.  I’m sure you are dismissing this out of hand.  But consider a few data points.  In the last election, Bernie Sanders called for a “political revolution” in every campaign speech.  After he lost, he published a “Guide to Political Revolution.”

In the last two sessions, California legislators have introduced bills to secede from the United States; 44% of California Democrats support this idea.   Nearly 40% of Texans would have supported secession if Hilary Clinton had become president.   This trend has support across America.  A recent Zogby poll shows that 4 in 10 Americans believe that states should have the right to secede; among millenials, support is almost 50%.  At least the beginnings of revolutionary thinking are in the air.

This is Going to End Badly

The history of revolutions is ugly.  Despite their apparent good intentions, revolutions almost always turn chaotic and violent after the initial rush of excitement (the American Revolution is an almost unparalleled exception).  Once chaos descends, people turn tocharismatic leaders who promise stability and order.  These leaders then use force and repression to consolidate their power.  As I described in my post on Communism, the revolutions in Russia, Cambodia, China and Vietnam turned stable, functioning societies into totalitarian police states which murdered millions.This not just history — we see the brutal consequences of revolution in present-day North Korea, Venezuala and the Democratic Republic of Congo.  In all of those countries, revolutionary leaders claimed the need to stay in power to enact their revolutionary agenda.  They acted with brutality to guarantee that ability.  Then, they shut down the free press, stifled religious liberty, prohibited free speech and oppressed minorities.

The end result is a shattered society that takes decades to recover, and many things are lost forever.  Informal community institutions are upended, religious life is destroyed, and worship of the state (and leader) is exalted.  The disabled, weak, and frail suffer the most as the young and strong must work hard just to stay alive.

Revolutions are usually a disaster, and we should do our best to avoid them.

Instead of Getting Angry, I’m Trying this Instead

How to do that?  In these times of deep ideological divide, I’m trying to do the following:

In the end, America will be much better off if we tone down the rhetoric and be more civil.  America is well worth saving (I’ll address why in a future post) — it’s up to all of us to make sure that happens.