We at the Shire love Thanksgiving.  It is such a joy to gather with family and friends around a table covered with our favorite foods (we’re particularly partial to turkey and 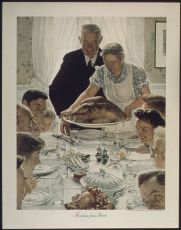 stuffing covered in gravy).  We also savor the spirit of the holiday — it is a blessing to give thanks for all that we have been given.

We’d like to mark the occasion by sharing the inspired words of John Witherspoon, who was a prominent (but little known today) figure in the American Revolution.  He was a Presbyterian minister, the only cleric to sign the Declaration of Independence, an early president of Princeton College, represented New Jersey in the Continental Congress, and was a teacher to many of America’s important early founders, including James Madison.

Witherspoon delivered many public prayers and sermons during the Revolutionary War period.  One of the best is his Thanksgiving Sermon, delivered in the fall of 1782, when the war with England had turned America’s way and peace seemed to

be at hand.  Witherspoon was marking a day of public Thanksgiving he had helped Congress enact.  Witherspoon’s Sermon is a reminder of the priorities and values that animated the founding spirit of America and should guide us today.  The following is an excerpted version; the full Sermon is here:

“We are met together in obedience to public authority, to keep a day of solemn thanksgiving to God, for the goodness of his providence to the United States of America, in the course of a war, which has now lasted seven years, with a powerful and formidable nation.  We are particularly called upon to give thanks for the final successes with which it hath pleased him to bless our arms and those of our allies, in the course of the last year, and the campaign which is now drawing to a close . . .

While we who are here alive before God this day, recollect with tenderness and sympathy with surviving relations, the many valuable lives that have lost in the course of the war, let us give thanks to God who hath spared us as monuments of his mercy, who hath given us the satisfaction of seeing our complete deliverance approaching, and those liberties, civil and religious, for which we have been contending, established upon a lasting foundation. . .

I hope that none here will deny, that the manners of the people in general are of the utmost moment to the stability of any civil society.  When the body of a people are altogether corrupt in their manners, the government is ripe for dissolution.  Good laws my hold the rotten bark some longer together, but in a little time all laws must give way to the tide of popular opinion, and be laid prostrate under universal practice.  Hence it clearly follows, that the teachers and rulers of every religious denomination are bound mutually to each other, and to the whole society, to watch over the manners of the several members.  Those who are vested with civil authority ought also, with much care, to promote religion and good morals among all under their government.  If we give credit to the holy Scriptures, he that ruleth must be just, ruling in the fear of God.

So true is this, that civil liberty cannot be long preserved without virtue.  A monarchy may subsist for ages, and be better or worse under a good or bad prince; but a republic once equally poised, must either preserve its virtue or lose its liberty, and some tumultuous revolution, either return to its first principles, or assume a more unhappy form.

From this results a double duty, that of the people themselves, who have the appointment of rulers, and that of their representatives, who are entrusted with the exercise of this delegated authority.  Those who wish well to the State, ought to chuse to places of trust, men of inward principle, justified by exemplary conversation . . . Those, therefore, who pay no regard to religion and sobriety in the person whom they send to the legislature of any state, are guilty of the greatest absurdity, and soon pay dear for their folly.  Let a man’s zeal, profession, or even principles as to political measures, be what they will, if he is without integrity and private virtue as a man, he is not to be trusted. . .

But if the people in general ought to have regard to the moral character of those whom they invest with authority, either in the legislative, executive, or judicial branches, such as are so promoted may perceive what is, and will be expected from them.  They are under the strongest obligations to do their utmost to promote religion, sobriety, industry, and every social virtue, among those are committed to their care. . .

Let us cherish a love of piety, order, industry, frugality. . .  Let us in public measures put honour upon modesty and self-denial, which is the index of real merit . . .

We are one of the body of confederated States.  For many reasons I shall avoid making an comparisons at present, but may venture to predict, that whatsoever State among us shall continue to make piety and virtue the standard of public honour, will enjoy the greatest inward peace, the greatest national happiness, and in every outward conflict will discover the greatest constitutional strength.”

From Witherspoon’s pen to our heart, soul and mind.  Happy Thanksgiving to all.