Washington has tax cut fever.  Politicians and lobbyists are discussing billions of dollars like it’s pocket change.  Since the plan is changing daily, we thought we’d lay down a few questions we’re using at the Shire to decide whether we would support the final bill:

Is it (much) simpler?

The current tax code is ridiculously complex.  On a routine basis, Congress reacts to the wishes of interest groups and passes new tax credits and deductions.  Of course, the government needs money to fund its operations, so taxes are raised in other places.  Over the years, the back and forth of these two factors have conspired to create a dizzying system.  Our current tax code contains over 4 million words and more than 200 tax credits.  Obamacare added so many new tax provisions that the IRS has published more than 100 pages of guidance on how to comply with it.  It is no wonder that 6 out of 10 Americans hire an accountant to help them file their taxes.

The tax code’s complexity is corrosive to our society.  Average people believe (with some justification) that it is tilted towards the rich and connected.  They feel like chumps if they pay their fair share.  Congress needs to take this opportunity to simplify the code.  We like the spirit of Congressman Brady’s postcard idea — let’s see if they can get anywhere near it in the final product. 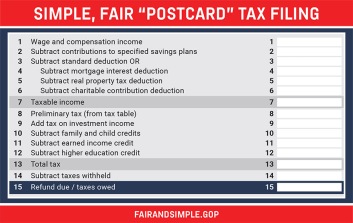 Does it Help Families?

One of the important selling points of the Republican tax plan is that will drop the corporate tax rate from 35% to 20%.  Given that America’s corporate tax rate is among the highest in the world, reducing the rate seems like a good way to increase the competitiveness of America’s companies.  We tend to think that a better business climate will accelerate economic growth which will help moms and dads everywhere.  But, that can’t be the only benefit — the final bill should tangibly help the average American.

Is it Too Radical?

While we are always open for ways to improve policy (especially one as broken as the tax code), it is important for lawmakers to know that real people have built their lives around the current situation.  For example, homeowners have staked their financial future partly around the value provided by the mortgage interest deduction.  Even if you accept the argument that the mortgage interest deduction is inefficient or ultimately raises house prices, completely eliminating it would throw the housing market into chaos.  It appears as though lawmakers have heard this message — their current proposal retains the deduction for most people.

Other provisions of the tax code to take great care before changing include, at a minimum, deductions for dependents (which parents rely on), the deduction for catastrophic medical costs and retirement tax provisions (like the 401(k) and IRA deductions).  While some adjustments may be appropriate, Congress should be acutely aware of the planning that people have done when they consider the final bill.

One Last Thing — Don’t Focus on the Estate Tax

We’d offer one final piece of advice for Members of Congress — don’t worry so much about repealing the Estate Tax.  While the idea of taxing death may be unappealing, the practical impact of the current system isn’t that great.  Today’s Estate Tax doesn’t take effect until a married couple has an estate of greater than $11 million.  Only 1 in 500 estates are subject to it.  And, a full repeal costs around $200 billion over 10 years — that money could be used to cut other taxes or reduce the deficit.   We’d shift the priority to other tax provisions.

← Pheasant Hunting in North Dakota
Welcome to the Shire →